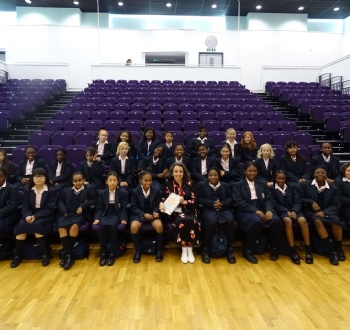 On Tuesday 17th September a group of our year 7 students attended a workshop hosted by James Allen’s Girls’ school to mark the 400th anniversary of Edward Alleyn’s charitable foundation. The keynote speaker was author Sophia Bennett who amongst her many accolades has won the Times/Chicken House competition and the Romantic Novel of the Year.

Sophia spoke to the girls about ‘winning like a girl’ and generously donated two signed copies of her books to our library.