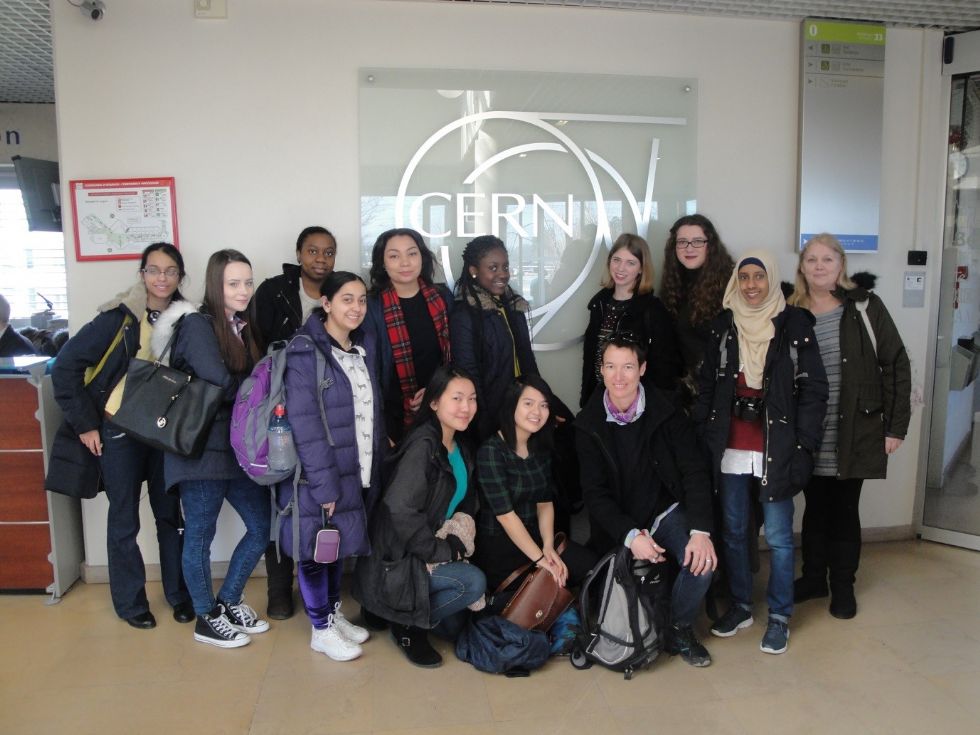 Ms Sabic and Ms Powell took 11 Sixth formers to CERN, Geneva, Switzerland on a Physics trip to experience the Large Hadron Collider and other experiments. This is what the students said:

On Monday, we began our exploration of CERN by taking the tram from our hostel up to the CERN facility. First we had the official tour, which included a presentation about the history of CERN. CERN was created after the Second World War, as a way for scientists across Europe (and later around the world) to make new discoveries and share their work. CERN’s first accelerator, the Synchrocyclotron, was built in 1957, which concentrated on nuclear physics research. In 1957, the Proton Synchrotron was built, and began to accelerate Protons at very high energies. These two machines were the first of their kind, and enabled scientists to take a deeper look into the world of particle physics. In 2008, the first beam of protons successfully navigated around the new Large Hadron Collider, and it was in this machine that the mysterious ‘God’ particle was discovered, the Higg’s Boson. 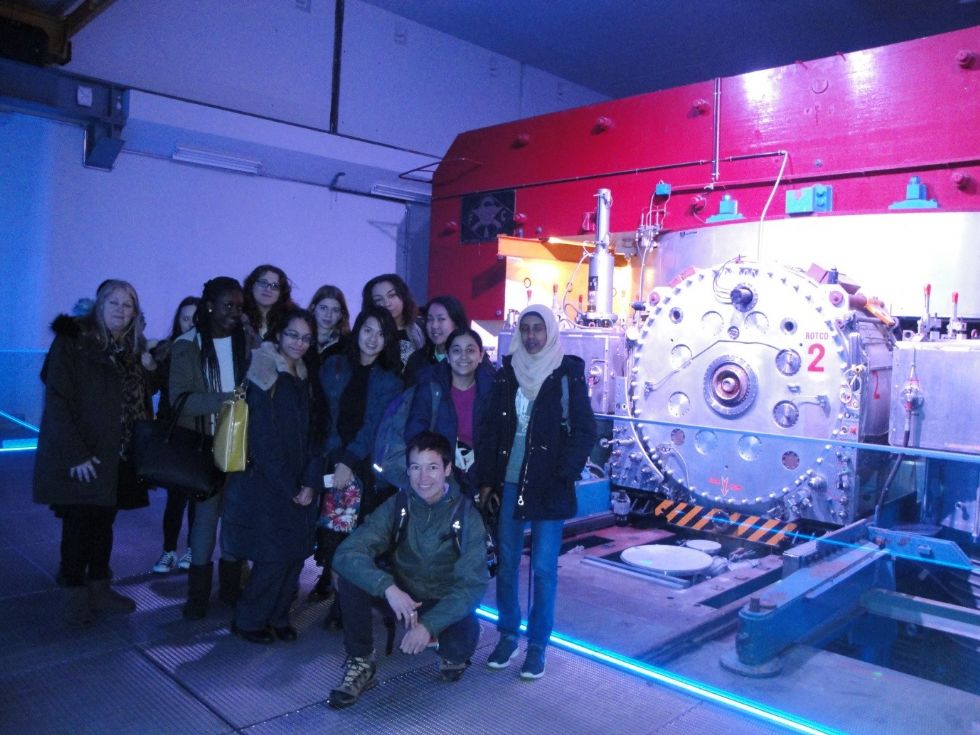 We then proceeded on a tour around the grounds, and saw the buildings that housed the ATLAS detector and the CERN exhibition. On our tour, we were privileged to watch the physicists and engineers that work on the ATLAS experiment at work, which everyone found very interesting.

After lunch at CERN, we were introduced to Lars Jorgensen, a scientist and manager at the Antimatter research projects. His workshop included a talk about his work, and an exploration in how antimatter could be used to help develop new technologies, including cancer treatments and a future form of fuel. The workshop was very interactive, and we had the opportunity to ask Lars as many questions as we wanted. We all felt inspired and motivated after seeing the phenomenal work that he does in his job. Lars then took us into a huge warehouse where the experiments are kept, and it was intriguing to see all the different technical aspects of such a ground-breaking experiment.
Lars also showed us CERN’s computing system which is the world’s largest computing grid. Standing outside this room you could feel the heat that was being generated by all the computers piled up on each other which reflected the scale of the number crunching these computers do. The Worldwide LHC Computing Grid project is a global collaboration of more than 170 computing centres in 40 countries, linking up national and international grid infrastructures. Tim Berners-Lee, a British scientist at CERN, invented the World Wide Web (WWW) in 1989. The web was originally created as a way for scientists at CERN to share information more easily, with each other and everyone around the world. CERN released the world wild web free, so that every institute and organization that wished to use it could do so easily.

On our second day at CERN we had the opportunity to work with a physicist in charge of the electromagnetic calorimeter at the other LHC detector: the CMS experiment. David Barney, the leader of the workshop, showed us around the control room and then explained to us the way in which the experiment detects the different particles that are released when two protons are collided. We then had the opportunity to analyse images from the experiment and decide what the particles produced were and what exchange particle they had come from. During their analysis, Bridget and Firdowsa discovered the Higgs Boson, the carrier particle of the Higgs Field which gives particles mass when they pass through. The Higgs Boson was only discovered in 2013 at CERN however it was predicted many years beforehand. Therefore by discovering its existence once more, Amy and Firdowsa have helped to support the Standard Model Theory of Particle Physics. During the workshop we not only learned more about particle physics but about the international nature of all the projects at CERN and the lifestyle which working there entails. 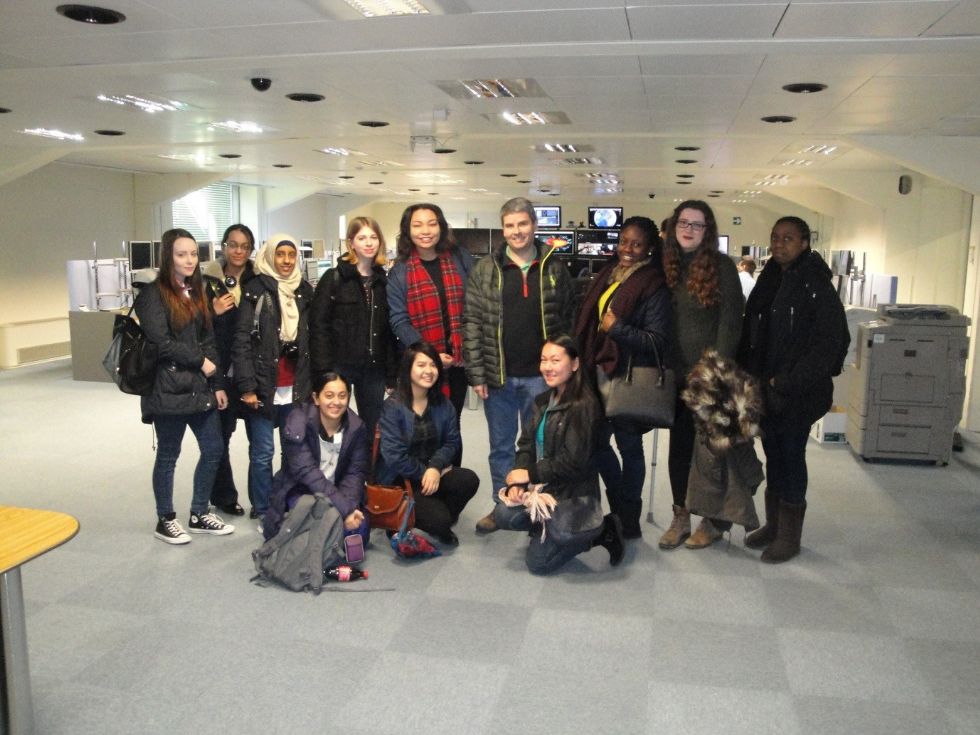 On Tuesday afternoon, we also had the chance to visit and have a tour around the United Nations (UN) headquarters where we learnt about the history of the UN including its predecessor, the League of Nations (some of you may be familiar with from GCSE History). There was also an exhibition created by Turkish artists on the theme of refugees around Europe who were affected by conflict and war. This taught us a great deal about the consequences of war but also the importance of support by other countries. 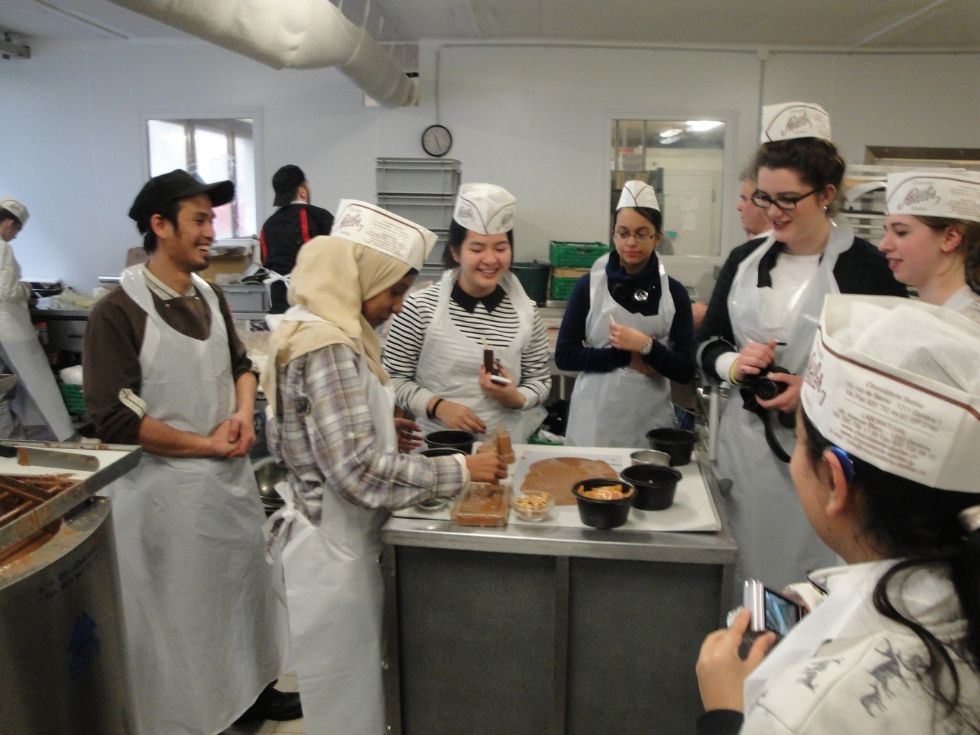 On Wednesday morning, we had a treat: we visited a chocolate factory. We learnt about where cocoa beans come from and how they are treated, crushed and mixed with sugar and powdered milk or coconut butter to make edible chocolate. We tasted different types of chocolate and also watched our presenter turn a bowl of marzipan into a beautiful flower as a decoration. During the presentation, Firdowsa volunteered to make her own bar of chocolate and flavour it with cherries, nuts and dried fruit. This was really fun and each of us was given some chocolate to take away.